Simeon is the second son of Jacob and Leah. His name may mean the one who hears because Leah was announcing that God had heard her because she was unloved.

Genesis 49:5 “Simeon and Levi are brothers— their swords are weapons of violence.
6 Let me not enter their council, let me not join their assembly, for they have killed men in their anger and hamstrung oxen as they pleased.
7 Cursed be their anger, so fierce, and their fury, so cruel! I will scatter them in Jacob and disperse them in Israel. 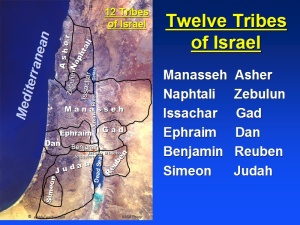 country. I have never read anything about what they did when the two kingdoms separated but there are Ten Tribes in the Northern Kingdom if you count the east and west tribes of Manasseh as separate tribes. There is the saying “from Dan to Beersheba” that may still be showing there was a separate tribe of Simeon; Dan was the Northern most tribe and Beersheba is in the middle of the land that was allotted to Simeon and was the most important city in southern Israel. Ziklag (where David had a base in 1 Samuel 29) was considered one of their thirteen towns in Joshua 19. In Joshua, Judges and 1 Chronicles Simeon is mentioned several times as doing things with the men of Judah and they appear again in the reforms of some of the kings in 2 Chronicles. So they do appear to have been dispersed in Israel according to the word of Jacob.

They do appear in Ezekiel and Revelations in the list of who gets land and have men among the 144,000; they are on the blessing side in Deuteronomy 27 but are not mentioned in Moses’ blessings in Deuteronomy 33.

A notable accomplishment for the tribe in 1 Chronicles 4:42+43 was that they killed off the remaining Amalekites who were still living in the land of Seir, they were the people who attacked Israel as they were going to the Promise Land. See my Amalekite blog, please.