When it comes to symbolism what better icon is there than the grape plant for representing the Church of Jesus?  Jesus used it in parables, it is part of our communion and it is 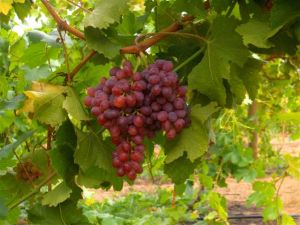 referred to throughout Scriptures. Now as with most symbols you can attach several meanings to grapes and its vines; I am going to look at a few and let God reveal others to you.

However, you view wine drinking is between you and Jesus but the grape plant and its fruit are and always will be part of Church symbolism.

The picture of the grapevine is from http://free-extras.com/images/growing_grapes-5434.htm

First, my apology to anyone who is not familiar with American slang; the word “nut” can carry several meanings and for this blog, it is someone who is crazy (at least according to worldly standards).

The main story of the Recab family is found in Jeremiah 35. Here the prophet Jeremiah is

instructed by God to have all of the men of the family come to the Temple and serve them wine. No pressure right, THE MAN of God invites you to church and expects you to join in “the boys night out” he is throwing. They refuse and state that they don’t drink because of a long-standing family tradition. (Drinking alcohol is not the point but it could be; I know it is a very volatile topic. I don’t drink because it is one thing that God delivered me from when I got saved. I have found out through the years that it is not me who is uncomfortable with not drinking but the drinkers around me.) They also state another family tradition of not owning houses or planting fields. Now all of this combined for some people would qualify them as “NUTS”, no “American Dream” of your own house; then to top all of that off they tell the man of God, NO.

So who were these Recabites who would say no when put into such a pressure situation? According to 1 Chronicles 2:55 they are one of the family groups that came from Caleb, the faithful spy in the Exodus story. Now there are several “Recabs” in the Bible and not all of them are from Caleb and when you read verse 55 you may recognize Kenites and again there are several groups with this name that do not seem to be related. But more specifically they may have come from the Jehonadab who sided with Jehu in 2 Kings 10 (it makes you wonder if they are part of the 7000 in 1 Kings 19) to get rid of Ahab and the prophets of Baal. So taking a stand and following God was a long time family tradition for the Recabites.  And in Jeremiah 35:19 God honors them because they honored the instructions of their ancestors. With a promise to always have a family member who serves God!