Shechem in Genesis 33 and 34 is a family and a town. In my tribe series, its importance is 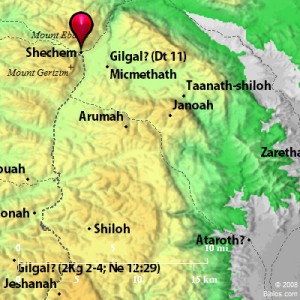 that it is the places where Simeon and Levi incur their father’s wrath by killing all the men of Shechem. It is also where Jacob built an altar and bought a piece of land that he later gave to Joseph.

After Joshua brought the children into the Promised Land they were instructed in Deuteronomy 27 to have some tribes stand on Mount Gerizim and pronounce blessings for Israel and the other tribes to stand on Mount Ebal to pronounce curses.

The land went to Ephraim in the allotment and Shechem became a city of refuge as stated in Joshua 17:17.

We see it again in Judges 9 being associated with Abimelech.

When the Northern Kingdom went into exile the Samaritans were brought in to occupy the land.  They accepted some of the beliefs of Israel; one thing they did was to build a shrine on Mt. Gerizim to offer sacrifices. Years later in John 4 Jesus meet the women at the well in a town of Sychar, which is believed to be Shechem. If you remember this meeting was at Jacob’s well. 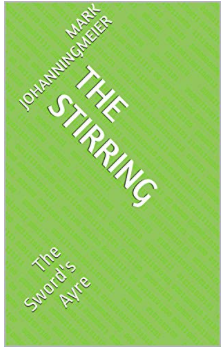 The Stirring is the first book in the Chronicles of the Singing Sword. Its setting is the land of Teras, Semeia, and the Harbor River Valley. It is modeled after European fairy tales and folk stories. There are also Jewish folktales and Biblical elements in the stories and settings. Marek, the son of the king of Teras has been sent on a Stirring. He meets and helps people in need as he travels the land heading to Ravenna. Thieves, a giant, and evil sisters who are in are dealt with as he learns about himself and why he was sent on this quest. A naughty horse, lonely people, beautiful princesses, and singing animals are some of the new friends he gets to help in this land of miracles and wonders.