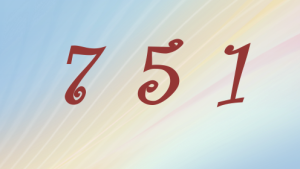 751 this number probably does not mean a thing to anyone but me. If it was 7:51 a.m. and I had just signed into work it might signify a very bad morning.   If I added the three digits together it would total Thirteen but I still think it is Bad Luck To Be Superstitious. No, it is a reminder for me that God is in charge! Yes, I will explain.

November of 2013 the total views on my blog for that month were 751. I was ecstatic as that was the largest total to date and I could not have been happier. Fast forward to November of 2014 and the total views on my blog were 751 and I was devastated. You see the months in between had seen an increase in the number of views and October of 2014 had been my highest month ever with over 1500 views. The number of views cut in half for no apparent reason, I was starting to have big plans, I had my hopes up, and I was projecting an increase. The 1500 views had given me a vision for what could happen and to be honest I was full of my self. Then came 751 and a reality check when I looked at those two totals sitting on top of each other on the “Summary Page.” It took me several days to recover from the shock and the attacking questions of, “What have I done wrong; What am I doing wrong.” The exact same number of views, what were the odds of that happening?  The pettiness of my reaction to the whole situation and my contrasting emotions!  That is when I realized that I had gotten things out of alignment and God had given me a wakeup call. Had I started to take my eyes off of Jesus, yes!  Does He want my/your full attention, yes! Jeremiah 29:11, God has a plan for us and we need to be open for His plan and keep Him as the middle of what we are doing.  He is faithful; if you are too far in front of Him He will pull you back and if you are lagging too far behind Him He will clear the way so you can see Him again.

Do you have a 751? If your plans suddenly are not what you expected might I suggest you embrace the reality check and find comfort in the fact that God loves you more than you realize!