Previously, I wrote a blog entitled Where and When the Psalms Were Written. In that blog, I matched the verse in the Bible that may have been the inspiration for writing the Psalm. Psalm 60 and 108 were two of those psalms but I want to compare them because they have a large similar portion used in two very different psalms.

I believe Psalm 60 was one of the reasons I started doing the matching. Its timestamp was easy to find in 2 Samuel 8:13 and 1 Chronicles 18:12 which tells of the 12,000 Edomites and the Valley of Salt. The introduction and the verses don’t really match and if you do a “search” on the Valley of Salt there are several reasonable explanations as to why there may be differences. (The Valley of Salt is also a topic of disagreement because we are not sure where it is/was.)

Psalm 108 I originally put with 2 Samuel 6:5 when David was bringing the Ark to Jerusalem. David the Writer uses rhetorical devices in many psalms by repeating phrases but in these two Psalms, a large portion is used in apparently two different occasions much like Psalm 14 and 53. These “re-purposed” psalms are also in different “Books” within Psalms. I compared Psalms 135 to 136 because of similar content but they really are presented in very different styles.

Not all Bible translations have a chapter “headings.” I like them because they can allow your imagination to soar as to the “when what, and why” they were written and used. Psalm 108’s heading is not a repeat, as most people will say all psalms were sung. “Song” and “psalm” here are two completely different words. I can imagine that it was a favorite that you might hear someone humming in the marketplace or while they were working.

Psalm 60, on the other hand, has all the markings of a formal arrangement that was used at special gatherings. Asaph may have been the “director” but we don’t know for sure. Miktam like maskil is thought to be musical terms whose exact meaning has been lost to us, what a shame. It also has a Selah at verse 4 which may signal a pause to give time to reflect. The fact that David set it to the tune of another well-liked song just shows that we have not changed all that much, my example is the hymn, “Amazing Grace” (it was set to a popular tune of the day). But the “for teaching” is what catches my eye. David knew the power of music to help with learning and remembering!

Psalm 60 shows great distress and turmoil and the unspoken “where are You, God.” The term “banner” in verse 4 is a very “visible signal” that pulls the learner back to the Father. The start of Psalm 108 could not be more different with phrases like “make music with my soul” and “your faithfulness reaches to the skies.” Well maybe not. Love and faithfulness reaching to the skies and a banner do sound like the same thing.

The shepherd, the ridiculed little brother, the youngest son, the overachieving young man who feared little are all descriptions of David. As complex as David may be the last two lines in this shared portion would only come from the heart of someone who has been in God’s presence and has valued that experience – “human help is worthless” and “with God, we win.”  The box below – on the left is the shared portion, the right side is my notes. 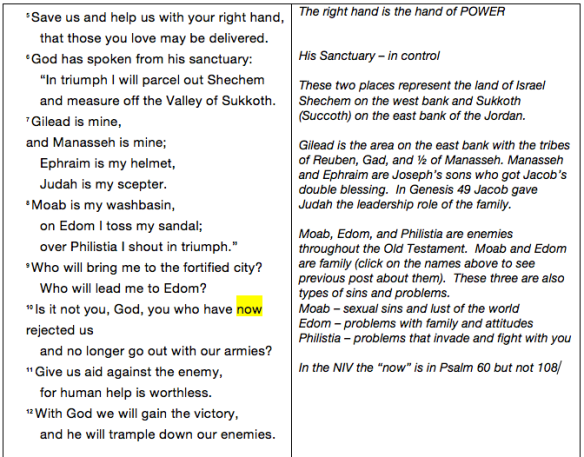