Hezekiah’s world, like ours, seems to have someone in the Middle East attacking people. For him, it was Assyria, Ahaz his father had made a treaty with them, who had captured and exported the Northern Kingdom of Israel. An interesting way they had of subjugating a conquered people was to export part or all of the population to a new location. Assyria did this in 1 Chronicles 5:26 and in 2 Kings 17:6, 18:11 to Israel; the promise was a nice location and prosperity. This promise was in 2 Kings 18:31 and included a vine (grape), fig tree, and their own water supply. Israel was sent to the Harbor River area. 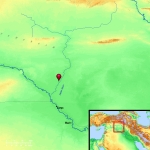 Samaritans of the New Testament were and are the people that foreign kings brought into the area when the Northern Kingdom was conquered.  They had/have some of the customs of Jews but held onto their own gods. Their story starts in 2 Kings 17:24 and there is still a remnant of them in Israel today. Jesus uses the Good Samaritan and had a period of teaching in Samaria after meeting with the women by the well.

Isaiah the prophet, now an old man, had served four kings and Hezekiah would be his fifth. Isaiah 6, his commission, was with Uzziah (Azariah) who ruled 52 years, there was a co-regency with Jotham who ruled 16 years, Ahaz ruled 16 years and Hezekiah ruled 29 years so he had seen a lot by the time he started helping Hezekiah. The Northern Kingdom had been deported and Assyria had changed rulers at least once; Assyria is mentioned in Isaiah 8 and again in chapter 10 and 14. It comes in again in chapter 36 in Hezekiah’s 14th year. (see My Timeline) It is interesting that Hezekiah’s story ends in chapter 39. Someone pointed out that Isaiah has 66 chapters like the Bible has 66 books and chapter 40 compares to the beginning of the New Testament.  Like the hope that comes with the New Testament chapter 40 starts with “comfort, comfort my people” and ends with mounting on wings of eagles. (see Waiting on God post)

Egypt is still a power at this time and is in conflict with Assyria for who is going to control the world. Judah apparently has gone to them for help in the past and the Lord in several places condemns and warns about that practice through Isaiah in chapter 31.  Josiah in chapter 35 tries to block Egypt when they are going to fight Assyria and he pays for it with his life; Neco of Egypt punishes Judah and its kings for its interference. Egypt’s power is finally broken by Babylon and has never really risen to world power again.

Wikipedia says that the Habor and the Chobar in Ezekiel are the same while these two sources say no, the Chobar is a canal further south.